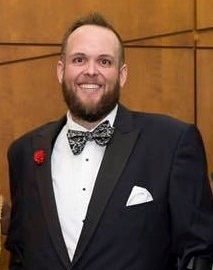 Nick was involved in a motorcycle crash in April 2015. He had a lengthy hospital course, being discharged from VCU Medical Center in July 2015. Nick has had a long recovery but is now back to work at his job and enjoys working out at the local gym! Nick and his mother, Sue, both expressed a desire to give back to trauma patients and became TSN Peer Visitors at VCU Medical Center.

Tell us a little about your trauma story.

“Motor vehicle accident involving a motorcycle where a vehicle did not yield properly which caused me to strike their vehicle and be thrown from the motorcycle. I landed a great distance from the accident scene under a guardrail. My initial injuries from the trauma were a broken pelvis, dislocated right hip, numerous other broken bones, ruptured bladder, as well as great internal bleeding. Secondary complications from the trauma included both liver and renal failure. While in the hospital I also developed a severe infection. I had countless surgeries and procedures that left me with an open abdomen at one point, an external fixation device on my pelvis and an airway adjunct to mention a few.”

“Recovery was by far the worst part of the process but you are not able to control it. You have to rely solely on staff and your dedication to get better. I was in great pain, not able to care for myself and felt as though I would never get better. Rehab was a long tedious process that at times I just wanted to stop. I am still recovering to this day and I can’t say that will end anytime soon. I still ache, get tired, have occasional pain, and cannot perform at a level I once could. However, every day is better than the last. I am surprising myself as well as others every day in my recovery process.”

Why did you want to get involved with the TSN program?

“I saw the importance of such a program in the healing process. While in the hospital I did not want to speak with anybody about my situation but that was my decision. Once released and back to normal I can see where it could have possibly helped me. More importantly, since I have been discharged I have spoken to patients at their request and I have seen the importance and how much it meant to them for me to come in and tell my story and to offer hope.”