Every two seconds somebody in the U.S. needs blood. As a former trauma patient, I experienced this firsthand back in 2004.

My story begins one month after graduating from high school. I was coming home from swim practice, and I was involved in a near fatal car accident. The impact of the crash shifted my heart across my chest and collapsed my lungs. Just like my dreams for the future, my ribs, pelvis, and left clavicle were shattered. I sustained damage to practically every major organ in my body, including laceration of the liver and kidneys, and I experienced 60 percent blood loss.

Using the jaws of life, the rescue squads and firefighters had to free me from the wreckage at the accident scene. They later received awards for their abilities in rescuing me. I was immediately medevaced to Prince George's Hospital Trauma Center. I was practically dead on arrival when I arrived at the hospital. I was soon given the last rites and my parents had to make the difficult decision to invite my family and friends to come say their final goodbyes, because it would be a miracle if I could survive the first 24 hours.

I survived the first day, followed by the second, and I would ultimately spend the next two months on life support in a coma. During this time frame, I underwent 14 major operations, received 36 blood transfusions and 13 plasma treatments. I ended up losing a total of 100 pounds. I remember overhearing that there was a strong possibility that I would spend the rest of my life in a nursing home in a vegetative state. 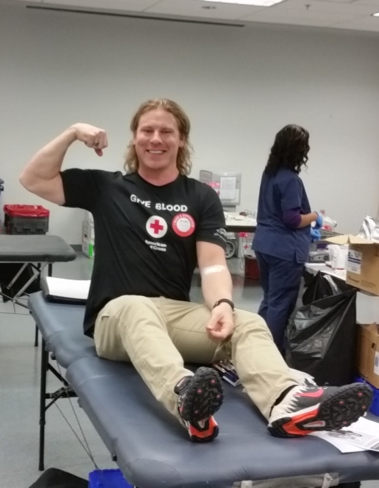 I’ll never forget the pain and suffering in the eyes of my parents, and I soon realized that what they were experiencing was far worse than my own pain. After a little over a month and a half, I began making my slow comeback from my paralyzed state. Starting with the blinking of an eye, the most subtle shake of a hand and eventually a faint smile, my parents knew that I was still there and fighting for them.

I began several months of intense physical therapy where I had to relearn how to talk, eat, tie my shoes, take a shower, and eventually walk with a cane. One year after the accident, I was beginning my freshman year in college and I had the fortunate opportunity to swim in the first swim meet. In October 2007, the healing was finally complete when I crossed the finish line of the Hawaii Ironman triathlon.

To show my sincere gratitude, I went back to the rescue squads and various hospitals to thank these amazing people firsthand. I soon began speaking with other patients and families to offer support, motivation, and help them navigate as they began their journeys of healing. To further help improve the patient experience, I became a dedicated patient and healthcare advocate and began traveling the world speaking with medical organizations, hospital associations, and many patients and families about their experiences in the health care setting.

After many conversations with my care providers, I became aware that there was also another group of people that played a very important role in my survival — my 36 blood donors.

For more than a decade, I have proudly supported the Red Cross mission by hosting dozens of blood drives across the country, donating blood on several occasions, speaking at hundreds of events to raise awareness on the importance of blood donation, participating in more than five dozen endurance events wearing 36 tiny red crosses on my race suit in honor of my blood donors. I wanted to do all that I could to offer support for patients in need.

I received 36 blood transfusions over the course of my emergency treatment and recovery. I think about these selfless people every single day. Their blood was not only lifesaving, but also lifegiving. 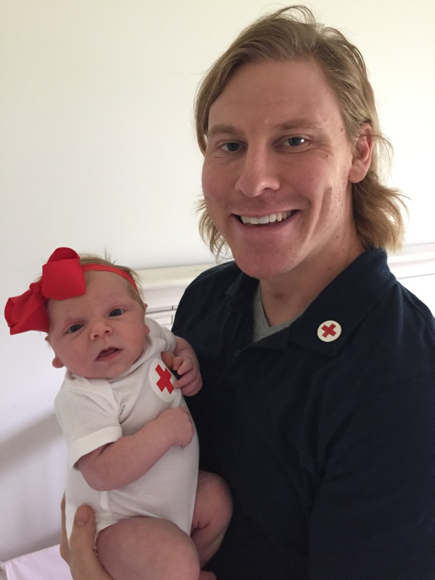 Since my trauma, I’ve been able to make a full recovery, finish college, go on to earn my master’s degree at Johns Hopkins University and get married in 2013. My most cherished moment over the years came about last July when my wife and I welcomed our first child into this world, a daughter that we named Clara in honor of Clara Barton, the founder of the American Red Cross.

As a former trauma patient and blood recipient, I have dedicated my life to supporting the Red Cross mission. By giving just one hour of their time, my blood donors not only helped give me the chance at a lifetime, but to also bring new life into this world.

To find opportunities to give blood, visit: RedCrossBlood.org.