TELL US A LITTLE ABOUT YOUR TRAUMA STORY

On 10/30/16, I was on a group trail ride in a state forest. I split off from the group to take the shorter of two routes back to the trailer parking area. My horse and I were alone on the trail and he was behaving perfectly. There had been many bridges on our path and my horse was doing a good job crossing them, so I mostly let him choose which bridges to take and when to ford the water or mud. On one bridge, he lost his footing, his feet began to flail wildly, and I knew we were going to fall. I threw myself off the side because I was afraid he might land on me, but I landed too close to his feet and he accidentally stepped on my chest. As I lay in the dirt dying, two riders came along and one offered to help. He tried to get me up on his horse to walk me back to the trailers, but I could not do it, so he called for help. The leader of the ride happened to be a nurse practitioner. She came running on foot, followed by 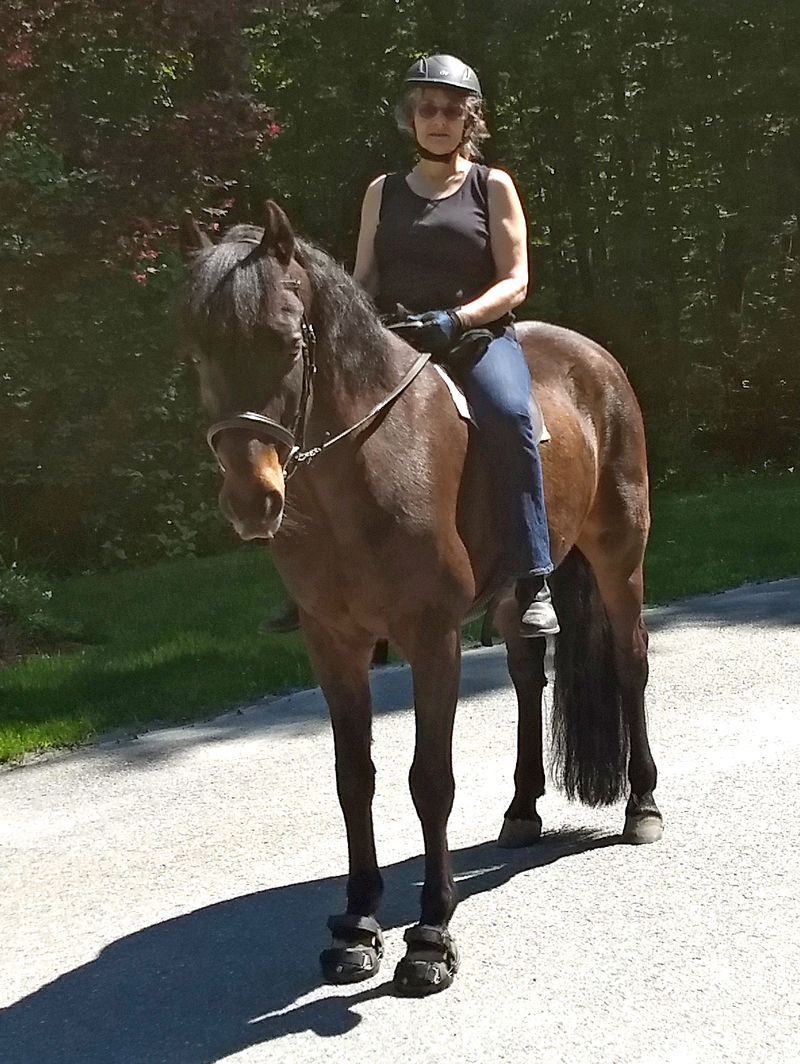 my husband and some helpers. The NP knew what to do. Strangely, I wasn’t in a terrible amount of pain, but I was having a lot of trouble breathing and wanted very much to go to sleep, but the NP kept me awake. I was very worried about my husband because it looked like he was in shock. EMTs came and carried me out of the woods on a litter to a ground ambulance which took me to an air ambulance. The helicopter flew me to a level 1 trauma center where they saved my life. I learned later that the EMTs did not think I would survive and that a kind stranger took my horse home to care for him until my husband could pick him up.

I had a broken sternum, seven broken ribs, one collapsed lung, and the other lung partially collapsed. I had mostly excellent care in the hospital, but there were some challenges with medication and food (I have celiac disease). They removed the catheter for fentanyl from my back after five days and switched me to the oral version, but the nurses said I didn’t complain enough to get it, so I had to beg doctors for help and one finally told the nurses to give me whatever I wanted. My husband came and helped when he could, but he needed to take care of our farm, too. I passed the mobility test to avoid rehab (I was pretty fit before the accident) and was discharged to my husband’s care after a week. It turned out I had caught pneumonia in the hospital and had to return soon for another week’s stay. I had another bout of pneumonia weeks after I returned home, too.

Back at home, I could not lie flat in bed for months, so I had to live in a recliner and use a walker to move around. The pain was very bad. Day and night blurred together. My husband slept next to me on a sofa bed and medicated me around the clock. I had an iPad and earphones to use when sleep evaded me or to distract me from pain and boredom. I suffered a lot and thought about how it would have been so much easier to die. I would have just closed my eyes and drifted away, with hardly any pain. I thought about how it would be so sad to someday die a terrible way from disease, when it could have ended so easily that day in the woods. Some days, staying alive seemed too hard. I asked my husband if he wanted me to stay alive. He said yes and I could see my death would make him very sad and decided to keep trying to live. I don’t know how he did it, but my husband did all the house and farm chores, as well as my care, alone except for some occasional help from friends and family. He gave me the precious time to heal and only asked for my help with the animals when he needed it. My dear mare was dying of cancer, and I would hobble out to the barn with my walker and do the best I could to help. For a while, a neighbor came and helped him every day with post-surgical care for her wounds. When the mare died, I was too unwell to help with the vet and knacker. My husband took care of it himself.

I lay in my recliner most of the time for about a year. I asked my husband to put my painting easel next to my chair, so it would be there when I was ready to do some artwork again. 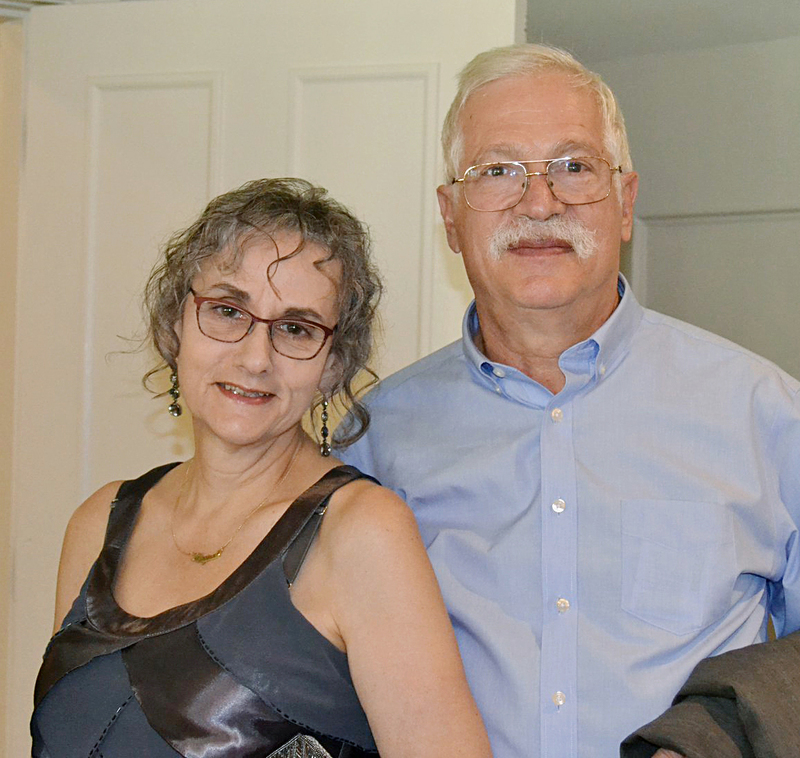 During this time, I was able to get up and do a little bit of freelance graphic design work for clients for an hour or so here and there. After a while, they stopped sending me work. I wanted to retire anyway. After about a year, I tried to be more active, but it was very hard and slow. If I did too much in a day, it could take a week or more of recliner-time to recover. I was so very tired all the time and my speech became slurred with greater fatigue.

An issue in relating to other people was that, ever since the accident, I never looked injured because all the injuries (except for a few bruises) were internal. I had difficulty communicating my needs to everyone, including medical people, and sometimes still do. I complained of fatigue to my doctor. She sent me to specialists to check my internal organs, which turned out to be in good shape. I tried talking with her two or three more times about fatigue, but she told me not to come back unless I had a new problem. I sometimes feel abandoned.

I had a bad case of PTSD, so I went to short-term therapy and did some of my own art therapy at home to combat a big fear of being in the woods. The pain lasted about two years, with my sternum being the last part of my chest to be generally pain free, except for minor arthritis pain. It’s deformed, but not noticeably. About 14 months ago, I sustained a concussion that was labeled minor, but it affected all my senses and other brain function, and still took about six months for the recovery from that. I recently passed the 3-year anniversary of the 2016 accident and I am doing pretty well, except for lingering fatigue of both my body and brain (now it usually takes a day or two to recover from a lot of exertion), communication with others, some headaches, and feeling some isolation out here in the country.

WHY DID YOU WANT TO GET INVOLVED WITH THE TSN PROGRAM? OR WHY DO YOU WANT TO SHARE YOUR STORY WITH OTHER SURVIVORS/LOVED ONES?

I have built a good life around my limitations. I’ve been a member of a small art group (that meets once a month) for several years, so I have some friend time. Last April, I opened an Etsy shop to show and sell my artwork (can’t keep it all… it’s a small house), so I could stay home and not run around to galleries. I’ve had 25 sales so far, including two custom portraits for the holidays (yay).

I am trail riding a little bit again and I found a trail buddy so I don’t need to ride alone. Finding someone took some courage. After my mare died, my riding horse got lonely and depressed and we bought him a miniature horse for company. The mini seemed bored… I got him a cart and harness and now I am enjoying taking online courses in training and driving miniature horses. The mini loves the training, too.

I am also doing a little bit of teaching in art. I love helping adults learn to express themselves creatively. I am ever grateful for the help I received from the trauma care team, NP, EMTs, friends, neighbors, and family. My husband remains amazing and usually patient. I followed him around for the first year or two of recovery. Now I am trying to be a bit more independent. Maybe my story—going from imminent death and the depths of despair to a good life within some limitations—can help give hope to others.

Update January, 2021: With my husband's help, I am back doing the activities I love, except I need to pace myself since the accidents. I have now sold 46 works of art in my Etsy shop. I still tire easily and am slower at painting than I used to be, so this feels like a big accomplishment :). A continuing challenge is to find a primary care physician who understands my post trauma issues and offers caring support.