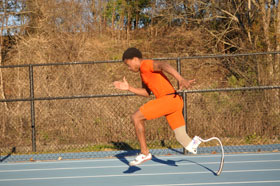 My name is Paul Peterson. I am 21 years old above knee amputee. I have been involved in several sports since I was a child. Track and field has always been my true passion. My first time running track was in 7th Grade. I specialized in the 100 meter dash, 100 meter hurdles, 4x100 relay and high jump. I also played football; I was a running back and kick returns specialist. I started off playing PAL (Police Athletic League) and NCYFL (North Carolina Youth Football League). In both of these leagues I was able to participate in winning championships.

As a freshman in high school, I played varsity running back and kick return. I had planned to participate in track, but before the season began, I was involved in a major motorcycle accident. My leg was broken in several places, leading an infection that left the doctors no choice but to amputate my right leg below the knee. I spent four months in the hospital before I met another amputee and my initial prosthetist, Kelvin Jones. These individuals inspired and motivated me to believe that life could be good and rewarding as an amputee. It was tough going back to school after the loss of my leg, but after standing up and walking for the first time I knew that I could adjust. After a couple weeks with my first prosthetic, I realized that I had to put my leg on in the morning before I did anything else! 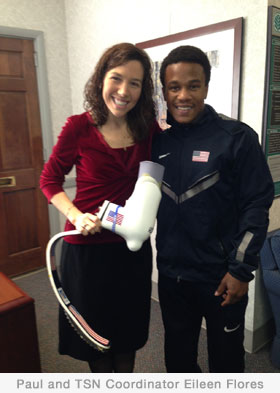 After I had adjusted to life as an amputee, Kelvin sent me to a clinic sponsored by Ossur. At this clinic, I ran on a new running foot called a Cheetah for the first time. It was electric! Shortly afterwards, I received my first running leg. Kelvin made the leg and I literally never ran on it until four years later. Kelvin moved to Fort Mill, SC and I began working with Clay Claiborne of Claiborne Prosthetics. Clay saw potential in me and started pushing me to pick up that new cheetah that was collecting dust. One day after weeks of telling me about running clinics, he called me 5:30 am and said “get your butt up, I’m coming to pick you up and I’m taking you to a C.A.F (Challenged Athlete’s Foundation) running clinic in Durham NC. After running in the clinic, I began to realize that I was the fastest amputee at the clinic. One of the organizers also noticed this and offered to send me to another C.A.F. sponsored event, in San Diego. At this event, I met other amputees with such high spirits. These men became my friends, but more importantly, they showed me that I could make something positive out of something as tragic as losing a leg. At this event I met a coach who gave me a four day tour of the Olympic Training Center. After coming back to Charlotte, I quickly began training at a nearby recreation center where a member took notice of my work ethic and determination and referred me the World Youth Coach. He trained me, even with no experience in the amputee field, for months. 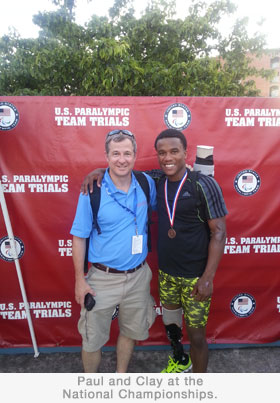 My prosthetist got me in involved in every open track meet he possibly could find. He took me to Orlando, South Carolina and UNCC track meets. Without him, none of my first meets would have been possible. I started progressing sooner than we thought. We decided to participate in some of the bigger Paralympic games. In the Endeavor Games, I received two gold medals. In the National Championships, I received 2 bronze. In the Desert Challenge, I earned silver and bronze. Competing in the National Paralympic Games, I placed 3rd in the long jump. After jumping at only a few events, I was fortunate enough to be ranked 3rd in the USA. This ranking allowed me to be on 2013 USA Paralympic world team and travel to Lyon, France where placed sixth overall in the World Paralympic Championships. After a slow start, I have jumped into this sport. I push myself each and every time I step on the track. I am truly honored to represent my country in track & field.

To all survivors- it’s a matter of determination and willingness to overcome the obstacles that are in your way. Know that it is just a matter of time.