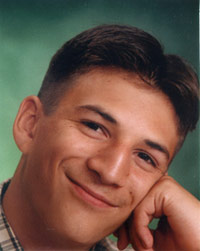 I know something is terribly wrong as I jump from bed to answer the phone. It is a nurse from a local hospital. Ryan has been in a car accident. Is he okay, I ask? It’s serious, she says, he’s with the trauma team right now. But…will he be okay, I beg? It’s very serious, she answers. I hear myself whimpering. My husband is out of bed getting dressed before I say a word to him.

We rush to the hospital, stunned silent by the fear. When we arrive, the receptionist tells us she has no record of Ryan and I begin hyperventilating, the terror is so great. I wonder now why there was no one to greet us. A phone call, a teenager’s life hanging in the balance, certainly someone expected us. Why wasn’t the front desk informed? This is cruelty beyond expression, telling parents there is no record of their child, the parents knowing that their child was in dire condition at that hospital thirty minutes ago.

Some time later we are told that Ryan is in an operating room. I grow hopeful. We are sent upstairs to a waiting area. Someone will be with us shortly.

We wait and we wait and we pace. Please, God, please, God, please, God is my silent mantra sung to each footstep. We share the waiting area with two women who have been thrust into some other horror. We don’t speak with them, and rarely to each other, using all of our resources to manage our inner turmoil. After an eternity that the clock measures as nearly an hour, we go searching. A nurses’ station. Help us. A phone call. Hushed conversation. Go back to the waiting area and someone will be with you shortly.

We go back and wait some more. Finally we hear footsteps and a doctor, accompanied by a nurse, approaches us. We search his face, hopeful and expectant. Then, I’m sorry, we couldn’t save him. He rallied there for a while. I thought we had him…

My knees buckle and I feel Michael grab me as I collapse to the ground. He is making strange gasping sounds that turn into sobs. The world turns dark.

Then we are taken to a place in the hospital they call the Family Room, where they take parents whose children have died. The nurse is talking about her teenage son, how she worries. A welcome ocean wave pounds in my head, drowning her out. I am trying to be polite while silently shouting shut up, shut up, shut up. My new mantra. I am hugging myself, rocking back and forth, Michael’s arms around me.

Pat charges in, wild, followed by Melissa. Is he okay? I look up through foggy eyes. Dead, I whisper, not knowing how else to say it. He’s dead, I say again, trying out the word. Ryan’s best friend, towering above us, bursts into tears.

It doesn’t occur to me that Pat and Melissa, Ryan’s friends, should probably not be permitted in the Family Room. We had just learned of Ryan’s death, and we are in this room. We don’t know what to do and so we do nothing. People sit with us, first a nurse and then another nurse and then the chaplain, and now Pat and Melissa.

Do you have any questions? Was anyone with him? I ask in a whisper, staggered by the enormity of it. Yes, two people. Who? We cannot provide you that information. Are they okay? One is doing fine. The other is still being evaluated. Who was driving? We don’t know. What type of vehicle were they in? We don’t have that information.

I remember asking those same questions again and again. I needed to know. The not knowing, the withholding of that information seemed just another layer of cruelty. Perhaps they didn’t know. But I needed to know.

Not scientific research or anything like that. Some person will have to directly benefit. That can be done, we are told. We will have the transplant team contact you.

Does he look hurt, I ask? Every expression a stunned whisper. He doesn’t look too bad. His nose and lower face are swollen, probably broken, but he has only one small facial laceration. And he has some incisions where tubes were inserted to drain blood from his body cavity. But his body will be covered. Oh. His face looks okay? Yes. Swollen, his nose was broken, and that one laceration. I don’t know. Maybe.

That is good enough for them and so we are off. We did not know what to do, so we do as we are told and things happen as they happen, not influenced by us.

We follow the nurse and the chaplain, crying as we walk through the corridors, up the elevator. Pat and Melissa trail behind us. No one objects. Everyone who passes stares at us, intrudes on our pain. And then he is there, in that room. I stop, afraid. I can’t go in.

I think it is the hospital morgue, but then again, it maybe it is an operating room. It feels dark and cold and unwelcoming. That open doorway a barrier, something I shouldn’t breach. I know that room will swallow me, thrust me into a place I can never return from.

The others go in, come back out, gently urge me to see him. And then I go, even as I know I should avoid that room with all my strength. They are staring at me as I look at Ryan, gray and swollen. I hear myself ask Michael if Ryan is cold, barely audible. I need to know before touching him. Michael nods. I gently touch Ryan’s cool head, afraid to touch his face it is so terribly swollen. I am crying, mumbling things as I look down upon my boy, my only son. I love you how much big is the sky, Ryan. I love you how much big is the sky, I silently pledge, again and again. Those are the words Ryan first used to express his love when he was just two or three years old, the words we used in our private moments. I want everyone to leave me alone, but I don’t know how to say it.

Each observation staggers me. There is blood drip, drip, dripping and I wonder where my son has gone. Ryan is covered to his chin with a sheet. It is vastly extended at his abdomen, and markedly flat where Ryan’s legs should be. I don’t know it yet but this vision will cause many months of horrific nightmares as I frantically search and search for Ryan’s legs. He can’t come home until I find his legs. The nightmares finally end after Michael tells me the funeral director told him Ryan had his legs. Sometimes I still wonder.

And then it is done. We are off again to the Family Room. Do you have any more questions? How was he transported? By ambulance. LifeStar was grounded.

That is the hazard of country life. There are no hospitals nearby. It takes time to get to accident scenes. Volunteers, bless them, provide emergency medical services. And sometimes LifeStar is grounded.

Suddenly, it was time to leave the hospital; two stunned and broken people not knowing what to do, but knowing we had an awful lot to do. We weren’t well versed in the rituals of death.

Condensed and Excerpted in part from Sherry Chapman’s memoir with the working title, Unfathomable Loss: A mother’s grief journey. Copyright © 2003-2008 by Sherry Chapman.

Back to Stories from Family & Friends