October 31, 2011.  Halloween.  A day that will forever be etched in my memory.  I rode my Harley Davidson to work that morning.  Problem is I didn’t make it home until a week later.  Traffic was very heavy that evening.  A vehicle turned left directly in front of me.  My motorcycle slid sideways and my body slammed against the vehicle.  Once my body crashed into the vehicle I was thrown from my motorcycle and landed in the turning lane on the busy highway.  I was still conscious but was quickly going into shock.  I vividly remember lying in the highway with vehicles going around me and no one coming over to help me.  Several people had stopped, some were outside their vehicles, but wouldn’t come over to me.  Thankfully, an off-duty nurse that was traveling through the area stopped, stayed with me, and comforted me until help arrived.  The last thing I remember was the doctor in the emergency room intubating me and how painful and smothering that was. 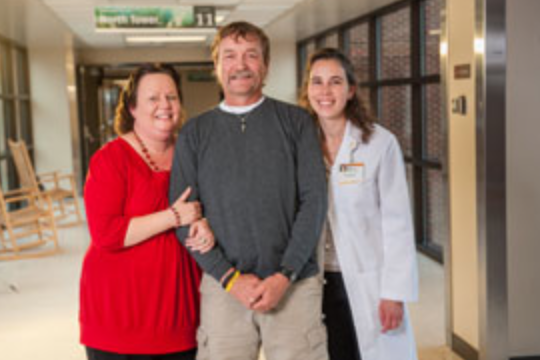 My wife tells me that I was airlifted to Wake Forest Baptist Medical Center.  I had to be given a total of 18 pints of blood.  The doctors were unsure if I would survive.  Some three or four hours after emergency surgery a doctor emerged to give my family a report.  He informed them that I had made it through surgery and I was stable.  They did have to amputate my leg in order to stop the bleeding.  My orthopedic doctor explained to my wife that she had only done what had to be done to save my life and she would have to go back two days later and finish the amputation above my knee.  More body scans were done and it was determined that my left leg was broken right below the knee joint.  That meant surgery on that leg also.  It took plates, screws and rods to repair the damage to my left leg.

My first recollection was two days after the accident my son waking me while in ICU and breaking the news of what had happened.  I am grateful that he had the courage to do this instead of allowing doctors telling me.  With amputation of one leg and repair of the other broken leg, I was left in a non-weight bearing state for almost three months.

Miraculously, I went home from the hospital seven days after my accident.  Physical therapy was not an option until later since I couldn’t put weight on my other leg.  I went home to start my recovery process in a wheel chair and was virtually bed ridden for three months.  Those three months of recovery were the darkest times I had during my trauma.  Things seemed very uncertain and scary to me.  I attribute that to all the free time I had on my hands to just lay there and think.  Thankfully, I had family and friends that visited me regularly to get me through those rough times. 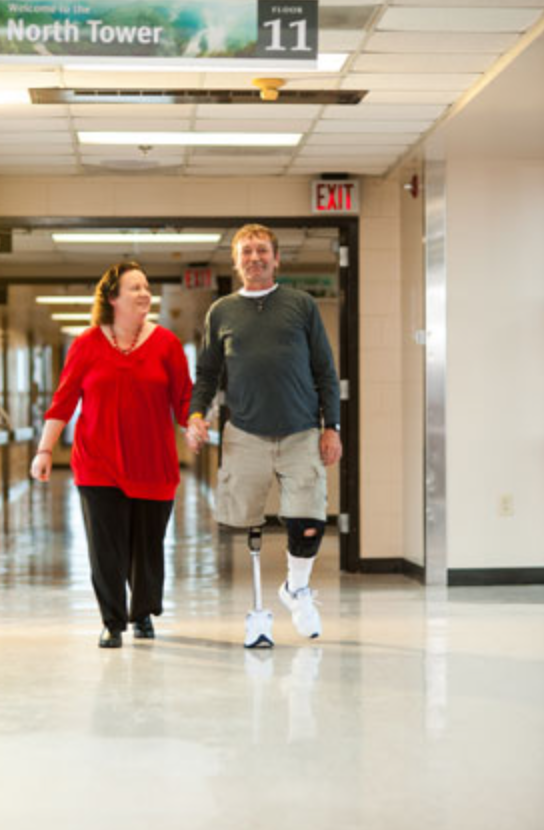 One of the happiest days of my recovery was the day I got fitted for my prosthesis.  The first steps in an upright position after over three months of recovery were awesome.

I believe that a positive attitude takes you a long way in any recovery process.  My greatest motivation during my recovery was my family. When my son and his wife told my then four year old grandson that I had lost my leg, he went to work immediately on a prosthesis for me. He made a prosthesis for me using his mother’s cowboy boot, guttering pipe and a pair or pantyhose.  He had some pretty good ideas for a four year old.  He said he had to make Papa walk again.  So, I had to work hard to recover and walk again for him.

My faith took me a long way in my recovery also.  I believed that with God’s help I could recover from my injuries and that I could be a help to others.  I became involved with the Trauma Survivor Network after my orthopedic surgeon (Dr. Anna Miller) referred me to the program.  I now volunteer one day a week at Wake Forest Baptist Medical Center talking with other survivors of trauma and their families.  I get great satisfaction in trying to help others recover.  It is great therapy for me to be able to share my experiences and encourage others.