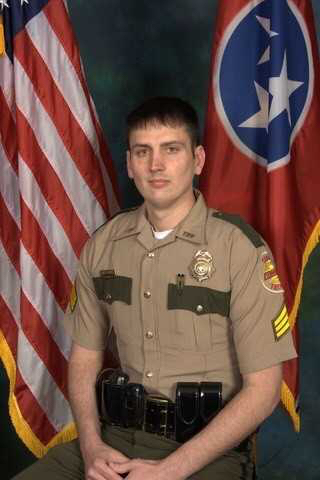 My story began on March 13, 2012. As a Tennessee Highway Patrol Sergeant, I was making a routine traffic stop in the middle of the night, and my car was hit by a tractor-trailer.  My car was knocked down the interstate nearly the length of a football field and burst into flames. Within seconds, an ambulance traveling on the interstate saw the car spinning and stopped to help.

A Knoxville Police Officer was en route to another call and he came upon the wreck within seconds. Officer Keith, Paramedic Leslie and a good Samaritan Mr. Stevens and helped free me from the burning car while EMT Graham used a fire extinguisher to hold the flames back. Shortly after, a third police officer, Officer Taylor, arrived on scene. He quickly positioned an ambulance to shield as bullets  were shooting out of the trunk of the patrol car. It was divine intervention for sure. If neither of the officers nor paramedics had been in the area, I probably wouldn’t have survived and transported to the University of TN Medical Center.

After several days in the Intensive Care, the doctors changed my status from doubtful to probable. After two weeks in a coma, and still on life support, I finally woke up and I felt so alone.  I have a profound faith in God which has deepened more as a result of this whole experience.

My injuries were horrifying from internal decapitation (where the base of my skull separated from my spinal cord) to broken ribs and second-degree burns.  I wasn’t expected to live.  After multiple surgeries and a long road to recovery, I wrote a book about my experience called Trial by Fire.  It shares with others my experience of healing, my devote faith and my forgiveness of the truck driver that hit me.

I had to work with physical and occupational therapist daily and then weekly. Two years after my accident, I was able to undergo a second surgery to remove the neck and spine hardware from my initial surgery.

While I can no longer work as a police officer, I am using this experience to create a new life – one that helps and inspires others.  While my life has taken a different turn than I ever imagined, through faith and perseverance, I want to use this experience to make a difference. That’s why I became a peer mentor.  I enjoy visiting with patients and families, one on one. I hope that my experience helps them through the shock of their trauma and through their recovery.  I try to offer hope from the perspective of someone who has been there. I remember that I felt so much better about my own recovery after I talked to a friend who had also experienced a traumatic accident. The hospital staff was great, but no one had first-hand experience of what I was going through. After talking to a friend, I started feeling better about my own recovery, because some of the things he told me were exactly what I was going through.

The staff at the hospital were very professional and I owe them a special thanks for saving my life!