On May 9, 2011 my work day started out as most days with a meeting at a local coffee shop with a few co-workers then the drive to my first doctor’s office.  Having been a medical sales representative for almost 13 years in Central Virginia I was accustom to long hours of driving on curvy two lanes roads to travel from town to town and conduct sales calls with physicians.  On this day I was headed north on Route 20 to the little town of Orange, VA.  It was a beautiful spring day and I was still reeling from spending a wonderful Mother’s Day the day before with my husband, Chris and son, Beck.

I remember looking down at my speedometer and I was going the posted speed limit of 55 mph and then at my clock which indicated it was around 10:43 am.  Next I noticed the sign that said I was 1 mile away from Montpelier, James Madison’s Home, and 6 from Orange.  It all happened so fast.  Within the next 3 seconds I saw a car driving southbound roll off the side of the road.  My first thought was he is going to over compensate and come back and hit me.  I looked to the right, but there was not shoulder.  I looked to the left and remember saying “no” right before he hit me head on. 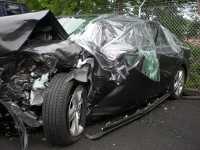 As I took the impact I remember preparing to die and not being afraid.  Then the crash was over and I opened my eyes and saw white.  At that moment I really thought I’m dead.  Then the air bag deflated and was I sitting in the middle of the mangled wreckage of my once 2011 Chevy Malibu with the dashboard in my lap.  My legs had been crushed.

I knew immediately it was bad.  I looked down at my legs and saw my patellar tendon hanging out so I stopped.  A woman who witnesses the whole thing ran up to my car to check on me.  I told her I was alive but to call the helicopter to come take me to UVA Medical Center.  I knew I needed to get there as soon as possible because that is the place that saves lives when they have to cut you out of a car.  I tried to get out of the car but my door was crushed in and would not open.  I was shaking all over from head to two.  Then I remember the smell.  The smell that I’ve never smelt before but it was probably a combination of electrical, car fluids and who know what else.  I panicked because I thought the car was on fire.  I’d survived this crash and I was not going to die burning up in the wreckage.  I tried to bust the door window out with my fist but that did not work.  Two men come up to my car.  I told them to bust the window and pull me out.  One ran for something from his car and he smashed the window in and was able to unbuckle my seat belt and they pulled me out.  The men carried me and I told them don’t let my legs touch the ground, they are crushed.  I also apologized for weighing so much.

They laid me behind my car on the side of the road. Sometime during all of this the lady who was first on the scene came over and told me the driver of the other car had open beer in his car.  That’s when I got man and started screaming at his car obscenities.  She then told me he was dead.  I calmed down and a lady still in her nightgown came out of her home and lay down next to me in the road and comforted me. I told her to cover up my legs so no one would see them. I remember just telling everyone to get the helicopter and get me to UVA.  The lady who was first on the scene came over and I asked her to call my husband.  She called my husband, Chris and put him on speaker.  I remember telling him “I’m okay, just go to UVA”.

Next, the ambulance arrives and the EMT’s start to work on me.  They wrapped my legs and put me on a stretcher.  I was screaming and yelling for help.  Then the state police officer asked me what happened and I told him, “he hit me and he was drunk.  He could have killed me”.  Once in the ambulance I asked the EMT’s if I was going to die and they would not answer me.  I got scared and started to pray.  I remember telling them I just wanted to go home and get in my bed.  Also, saying “I’m so tired of people telling me God does not give me what I can’t handle, this is ridiculous”.  When we got close to the hospital one of the EMT’s called my husband and told him we were here. He got to the hospital first.

As soon as the ambulance stopped at the bay doors the team pulled me out and ran with me down a long hallway to the trauma bay.  There I remember lots of people and lots of faces surrounding me.  The nurse caring for me took my jewelry off and cut off my clothes.  I could hear what the doctors were saying and I told her to tell them to talk quietly, I understood what they were saying.  At that moment the lights went out, they had put me under.

I woke up to my husband and son looking over me with my orthopedic trauma surgeon, Dr. David B. Weiss.  I don’t remember anything they said, just signing the consent form.  While waiting to be taken into surgery the pain became unbearable and I started to scream, “if you are not going to help me let me go”, and “this is inhumane, you can’t treat people like this”.  A doctor calmly told me they were getting the OR ready.  Minutes later I was rolled into the OR. 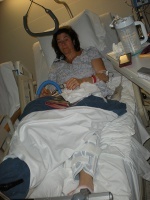 After my first surgery I remember being rolled into my room in the hospital and I was surrounded by my family and friends.  I told them what happened.  I remember saying he hit me, he was drunk.  I was not on my phone.  Four months later I learned from the Virginia State Police that he was driving under the influence of drugs.

The next few days are still a blur.  I recall the first time Dr. Weiss came to see me in my room.  My mom was there and I asked him if was going to be able to walk again.  He told me yes.  Then I asked him if my shoes would still fit.  He just smiled a little and said probably.

I spent 11 days in the UVA Medical Center.  During that time I was put under 3 times for surgeries to start the slow arduous process of rebuilding my legs.  I was discharged to UVA Health South for Rehabilitation for two weeks.  Once there I started to process what had happened to me.  I could not even imagine what life would be like moving forward.  I just focused on getting by one day at a time.  My son was graduating from high school the first week of June and I was determined to go.  I asked my therapist what I need to do to get out of here.  They set goals for me; I quickly met them and was able to be discharged before my son graduated.

My retired parents live 17 miles from Charlottesville, so I went to live with them so they could take care of me.  I was in a wheelchair with both my legs in braces.  Their home is one level so it was the perfect place for me to heal.  My husband went back to work and my son took a job in the DC area for the summer before going off to his first year of college at Virginia Commonwealth University.  Weeks turned into months and then almost a year passed.  I had worked hard with my physical therapy team at UVA Powell Wellness Center in Culpeper, VA.  Once I was cleared to put 100% weight on both my legs I started therapy in the pool.  They have an amazing pool there and that’s where I learned to walk again.

After a year I started talking to Dr. Weiss about the next step.  It was time for more surgeries to fine tune and tweet the original repairs.  I went under the knife 3 more times for multiple procedures.  The crash left me with over 12 broken bones in my legs, broken ribs, and a huge hematoma on my left side, tinnitus, BPPV, and PTSD.  The number of procedures performed the 6 times I went into the OR are too many to count.  My team of medical professionals who helped me recover included 11 providers in different practices of medicine who I had appointments with a total of 93 times.  I also need to include my team of physical therapist at the Powell Wellness Center in Culpeper, VA who after over 200 appointments got me back on my legs and walking.

Two and half years after the crash Dr. Weiss released me to return to a light duty full-time job.  I was partially permanently disabled and could not return to my previous career in medical sales and started looking for a new job in Charlottesville.  After applying for 136 jobs I landed a position at the UVA Medical Center as a Patient Relations Representative in August of 2014.

I am grateful for the Medical Center to offer me this opportunity to help others navigate the hospital system and offer empathy and support.  I love my job!

I am also excited to be working with J. Forrest Calland, MD, the Chief of Trauma at UVA in starting the TSN.   A year after the crash I found myself alone and lost as a survivor of a traumatic car crash.  I searched the internet for any local support groups for PTSD and trauma survivors.  There was nothing local in Charlottesville so I joined the TSN and utilized the online services.  I truly believe participating in the TSN helped improve the outcome of my recovery. TSN would offer trauma patients and their family members an unmet need in the medical center and community.  I also believe the program will improve patient satisfaction and offer support to the trauma team. 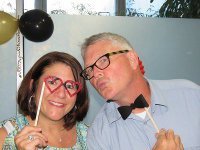 I focus on what I can do, and not what I lost.  To this day I continue to work to recover mentally and physically.  I was and still am also blessed to have amazing support from my family and friends.  Without them I would not have made it this far.  What I want other trauma survivors to know:  “Never Quit”; don’t be afraid to ask for help; this journey is a marathon, not a sprint; it’s possible to recover and live a happy and productive life; sometimes you have to go through something horrible before you get to a better place; and I am not the person I was before the crash, I’m better.